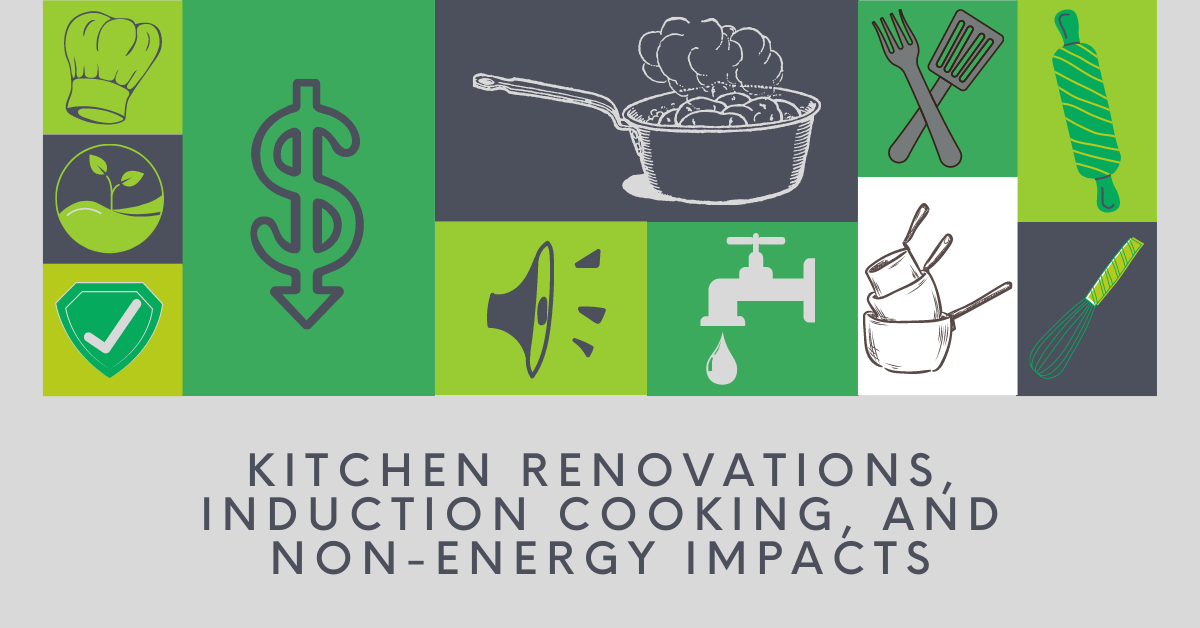 I am renovating my kitchen. The project was supposed to start in March 2020, but then the world shut down due to Covid. Now, nearly two years later, we are finally getting started. During that time, I have decided to switch from a gas range to an induction cooktop. While energy efficiency did factor into this decision, most of my reasoning to choose induction was due to its non-energy impacts. What are non-energy impacts and how do they play in the decision-making around energy efficiency? Read on!

One benefit of putting off a big renovation for two years (and also rarely leaving your home in that time) is that you get to really focus on the minutiae of the plan and consider the pros and cons of every decision.[1] During this time, the non-energy impacts of some decisions became very clear.

Non-energy impacts (NEIs) are additional impacts of energy efficiency beyond the energy savings gained from implementing the energy efficiency measure. These are often called non-energy benefits (NEBs) because they are almost often net benefits, but the impacts can be either positive or negative. NEIs can be realized at the participant level, with such things as reduced operation and maintenance costs, reduced health issues, and increased comfort, as well as at the societal level, with things such as increased economic development, reduced greenhouse gases from generation, and deferred system upgrades.[2]

NEIs are important to energy efficiency programs for several related reasons. First, as we’ll discuss in this post, they can make up a considerable part of someone’s decision to install equipment, often more than the energy savings themselves. If programs seek to increase the adoption of energy-efficient measures, then they should understand the factors that lead to the greatest level of adoption, even if it has nothing to do with energy, and promote those factors. Next, NEIs are important for cost-effectiveness testing, sometimes pushing a given measure over the cost effectiveness threshold. Symmetry in cost-effectiveness calculations: If a cost-effectiveness test accounts for the full cost of energy-efficient equipment then it should also account for the full benefits of that equipment.

Some common customer-level non-energy impacts of energy efficiency include: 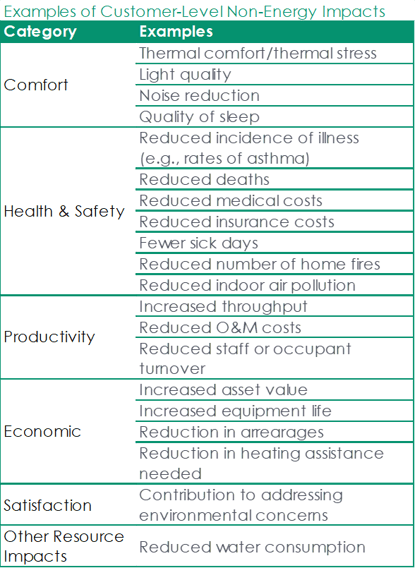 Source: Adapted from the National Standard Practice Manual for DERs

Back to my kitchen.

Induction cooktops use an electromagnetic coil below a glass cooktop surface to create a fluctuating magnetic field. There is no heat to the cooktop itself, but once a magnetic pan (e.g., an iron skillet) is placed on it, the magnetic field induces electric currents in the pan, heating it up. Once you remove the pan, an induction cooktop cools off much faster than other types of burners because it was only hot from contact with the pan. Unlike traditional electric coil burners, induction cooktops allow for precise control of heat (similar to gas). They also heat pans up very quickly because they generate heat directly in the pan rather than using a flame or an electric burner to transfer heat to the pan.

The energy savings from induction cooktops are not easy to find. ENERGY STAR only recently established criteria for this type of appliance. According to ENERGY STAR, induction cooktops transfer energy with approximately 85% efficiency, compared to 75-80% for resistance heating elements (i.e., coils) and 32% for gas burners. Interestingly, cooking efficiency depends on the size of the vessel as well as its power level (and I’m sure other variables). According to this EPRI research in this ACEEE paper, induction cooktops are much more efficient than electric coils for small vessels but are slightly less efficient for large vessels (and both are more efficient than gas).

The bottom line is that induction cooktops are in the same general range of efficiency as traditional electric coils and probably not noticeably different on your electric bill. Cooktops with traditional electric coils are also much less expensive than induction cooktops, resulting in payback periods for induction being longer than the equipment’s life. Additionally, while both types of electric cooking are much more efficient than gas, depending on your electric rates and the cost of gas, the utility cost may end up as a wash.[3]

So there must be other reasons why people like me choose induction over other options. Enter the non-energy impacts.

Let’s explore the non-energy impacts of induction cooktops in my kitchen. (For background, my house has oil heat, a propane range/oven, electric water heating, and solar PV and I plan to eventually shift to all-electric. My wife and I also like to cook and we have elementary school-aged kids.)

It may just be frequency bias, but ever since I started to think about what cooktop to get, I have noticed two things: 1) there is a lot of recent discussion about how bad gas ranges are for indoor air quality, and 2) I smell propane whenever I use my burners.[4]

Check out some of the articles and studies linked in the paragraph above for details, but broadly speaking gas stoves increase the concentration of NO2, carbon monoxide, and particulates by a considerable amount. This is linked to an increased risk of experiencing asthma symptoms and ever being diagnosed with asthma as well as other health issues. None of these health issues will kill you immediately, but over a lifetime add up to reduced life expectancy.

According to the EIA, 38% of US housing units use natural gas (33%) or propane (5%) for cooking.[5] I’m sure that many (most?) of those homes are like mine and not ventilated properly, meaning this is potentially a large public health problem.

Induction cooktops are much safer than both gas and electric resistance burners, which is a big consideration for my family. There is no open flame to accidentally catch a nearby towel or paper on fire. As mentioned early, induction cooktops also cool off very quickly. In addition to preventing burns to children and adults, this also prevents people from accidentally melting a plastic bowl or cutting board on a still-hot burner or exploding a Pyrex pan of brownies left to cool on a smooth surface electric range that was, in retrospect, still on.[6]

I love to cook and have always loved gas ranges because of their speed and control. This benefit over electric resistance cooktops is huge. However, from what I’ve experienced and seen, the performance of induction cooktops exceeds what gas ranges can do. That is a major benefit.

Because the surface of induction cooktops remains fairly cool compared to gas and electric coil cooktops, it is easier to immediately clean up spills and splatters rather than have them bake on and later need to be scrubbed off.

What About Commercial Kitchens?

Everything discussed so far has had a residential focus. But induction cooking can also provide enormous benefits to commercial kitchens. Check out this podcast which describes all of the benefits of induction cooking in the restaurant and foodservice sector. These include increased output because food heats up faster, reduced staff turnover because of more comfortable kitchen temperatures, drastically improved indoor air quality[7], and less time spent cleaning. In addition, there can be large energy HVAC savings because of reduced cooling and ventilation requirements.

Ok, so now you are sold on induction cooktops, but what does that mean for energy efficiency programs? We have already established that the energy savings from installing induction cooktops are likely small and they may not be cost-effective for most programs. However, I think this technology still provides an excellent example of how energy efficiency is likely not a leading reason why people pick one technology over another.

Programs should try to understand their customers purchasing motivations even if they are not related to energy. As with the case with induction cooktops, many people do not understand the benefits of other technologies because these benefits have never been demonstrated to them in a compelling way. People may not know that heat pumps provide a more constant temperature than furnaces or realize how loud their old heating system is. They may not recognize how much the risk of a natural gas leak or carbon monoxide poisoning weighs on them until someone points out an alternative. People may not think about the pleasure of sitting in front of a non-drafty window in the winter. Businesses may not understand the productivity gains possible from having efficient refrigeration systems that reduce spoiled food. When programs and their representatives can identify these unrecognized pain points and educate them on their alternatives, guiding the customer toward the energy-efficient option becomes much easier.

[1] In the course of two years, we even decided to move the kitchen to a different room in the house!

[2] Many NEIs, such as health impacts, can be realized at both the participant and societal levels, so it is important to avoid double counting them.

[3] Another avenue of savings for induction cooking is that there is much less waste heat which reduces the cooling load for air conditioning equipment. I’m sure that is modeled somewhere.

[4] Also on the list for the new kitchen is a new vent hood that exhausts to the outside rather than just circulate air around the room.

[6] These are totally hypothetical examples.

Building energy codes programs are a very cost-effective opportunity for energy savings and many...
Read More

In Part 1, we covered what energy code programs do and different ways of measuring code compliance....
Read More