As our industry’s goals shift from simply using less energy to reducing carbon emissions, the evaluation, measurement, and verification (EM&V) of these savings can become a whole lot more complex. Both sites and utilities need to understand how much carbon emissions they are actually saving, and this gets complicated as more types of fuels and sources are included, not to mention considerations of time and location. Let’s explore some of the issues.

Simply put, energy efficiency is using less energy to perform the same function. Sometimes this is very simple: you can replace an incandescent light bulb with an LED bulb in the same socket, use it in the exact same way, and see the energy savings in your electric bill. Quantifying the carbon savings from replacing a natural gas furnace with a heat pump, however, requires a deeper understanding of the original and new sources of energy and when and where the equipment is used.

While any reduction in energy use should lead to some level of reduction in carbon emissions, avoiding catastrophic climate change requires a deeper decarbonization in the form of shifting from carbon-intensive fossil fuels to cleaner energy. A major barrier to this is the fact that in most states lack policies that encourage (or even allow) fuel switching. As described by ACEEE, “state efficiency policies have tended to set up silos based on the energy source they seek to save, which has generally either been electricity or natural gas.” This structure makes it hard or impossible for programs to claim savings resulting from switching from other fuels, especially unregulated fuels like oil and propane. Fortunately, the number of states that have or are establishing holistic policies for carbon reduction is growing.

Regardless of whether you are a home/business, utility, or regulator, the central question for everyone is: if we are shifting energy sources, how can we accurately count how much energy is being saved and carbon emissions are being reduced?

The most common way to compare different fuels is to compare their energy content expressed in British thermal units (Btu).[1] The table below shows the Btu conversion factors for various fuels.

One thing to note is that although you can compare the energy (i.e., heat) content of these different fuels, they should not be treated as fungible for all use cases. Yes, you can make heat with any of these energy sources by burning them (and emitting CO2) or via electric resistance. But electricity is a much more flexible fuel than combustibles: we can power an electric motor and do many things with electricity that would be impossible or impractical with other fuels. For example, I am writing this blog on an electric laptop as opposed to Charles Babbage’s steam-powered analytical engine. Conversely, natural gas is very inexpensive per Btu of thermal energy compared to electricity (i.e., it is much better at heating things up). 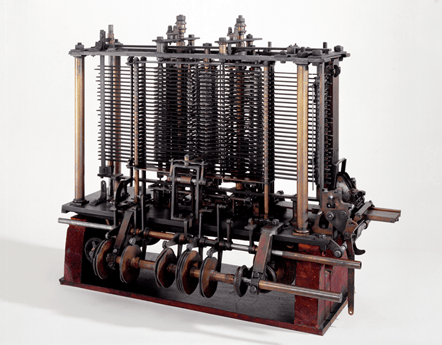 Charles Babbage’s steam-powered Analytical Engine from 1837 suggests that there are limits to the idea of fuel conversion.

To calculate the energy savings of a project at a given individual site (i.e., site energy) that has more than one fuel type, simply use the values in the table above to convert all savings into Btus. For example, if Option A saves 100 kWh of electricity and 100 therms of gas, it would save a total 10.3 MMBtu (million Btus). If Option B savings 200 kWh but only 75 therms, it would total 8.2 MMBtu in savings. This means that Option A saves the site more energy overall (i.e., at the meter) despite Option B having twice the electricity savings.

If you want to compare more than one site, though, it becomes come complicated. As described by ENERGY STAR, site energy may be delivered to a building in as either primary or secondary energy. Primary energy is the raw fuel, such as natural gas, that is burned to create heat or electricity. Secondary energy is the energy (heat or electricity) created from a raw fuel, such as the electricity purchased from the grid. Crucially, primary and secondary energy consumed at the site are not directly comparable and must therefore be converted into equivalent units of raw fuel consumed on-site (i.e., source energy).

Source energy represents the total fuel required to generate and distribute site energy, including all transmission, delivery, and production losses. For electricity, the source energy includes the Btus consumed per kWh generated and any line loses. As a rule of thumb, for every Btu of electricity consumed on-site, three Btus of energy are required at the source.[2]

Because of this, if you are burning fossil fuel to make heat, you are better off burning it on-site rather than burning it at a power plant to make heat to generate electricity which you then convert back to heat.

While the savings and cost effectiveness of replacing an efficient natural gas furnace with a heat pump will vary quite a bit based on climate and fuel prices,[4] heat pumps represent a large potential for decarbonization because they usually shift most or all of a building’s heating load from fossil fuels to electricity. Even if the energy savings (at the source) were negligible, a key driver of electrification is that the electric grid will become greener over time as no or low carbon generation (ideally renewables) replaces high carbon generation. See the chart below to see the drastic changes in electricity generation over the past 20 years. And while electricity generation will continue to become less carbon-intensive, the burning of fossil fuels (in a power plant or in a home’s furnace or boiler) will never have lower carbon emissions.

Most energy efficiency programs track savings at the site level because the efficiency improvement impacts the customer’s energy bill. However, for cost effectiveness testing (except for the participant cost test), the source energy should be used. Typically, this should already be baked into the avoided cost of generation, line losses, and avoided cost of carbon. These avoided costs should take into consideration expected changes in the generation mix over time.

As portfolio metrics expand to include carbon reduction, evaluators may consider sampling and weighting projects based on their carbon savings rather than their energy savings. For single fuel programs, this will not have any impact. However, for programs with electric and gas savings, changing from site energy to source energy conversions will result in a change in the relative savings of projects.

Lastly, (and this is way too big of a topic to discuss fully here), the carbon content of electricity is temporal and locational. This means that some areas and hours, days, or seasons are cleaner than others due to the generation mix in that place at that time. These two posts do a great job of exploring this further.

[1] A Btu is the amount of heat required to raise the temperature of one pound of water by 1 degree Fahrenheit or approximately the energy released by burning one match.

[2] The source-to-site ratio (usually ~3 as mentioned above), is equal to the heat rate divided by 3,412 Btu/kWh. Heat rate is a measure of electric generation equal to the amount of net energy used by a power plant to generate 1 kWh of electricity (Btu per kWh). For example, in 2019, the average heat rate for natural gas power plants was 7,732 Btu, meaning that the plants were about 44% efficient on average. See EIA’s FAQ for more info.

[3] The efficiency (COP) of heat pumps decreases with temperature but they are generally still more efficient than electric resistance for all but the coldest days.

[4] Replacing an oil furnace with a heat pump is a no-brainer, though.

I am renovating my kitchen. The project was supposed to start in March 2020, but then the world...
Read More

Building energy codes programs are a very cost-effective opportunity for energy savings and many...
Read More